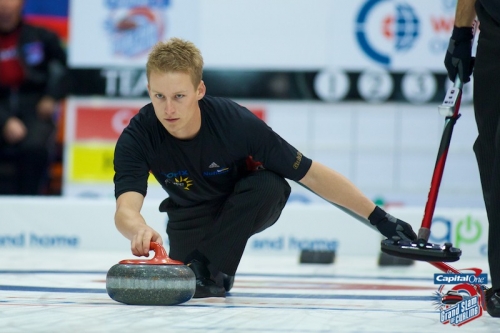 Born: Dec 22, 1985
in Calgary, Alberta
Resides: Kelowna, British Columbia
Throws: Right
Profession: Golf Opeartions Manager / CPGA Professional, Black Mountain Golf Club
High School: Rutland Senior Secondary
College/University: Okanagan College
In Own Words:
It has allowed me to do something that I am passionate about which is compete at the highest of level in sport. I am fortunate to have had great teammates with strong work ethic and an eagerness to improve. Curling has given myself the chance to travel throughout most of Canada and to other parts of the world. [cr][lf][cr][lf]I have also had the chance to meet and play against some of the sports greatest players and teams of all time.
Curling Highlights:
2007 Karuizawa Silver Medalist[cr][lf]2 Time - BC Mens Champion[cr][lf]2013 - Canadian Olympic Trials Runner Up[cr][lf]2014 - Canadian Men's Championship Runner Up (Brier)
Junior Highlights:
2002, 2005, 2006 BC Jr Champion[cr][lf]2006 Canadian Runner Up [cr][lf]