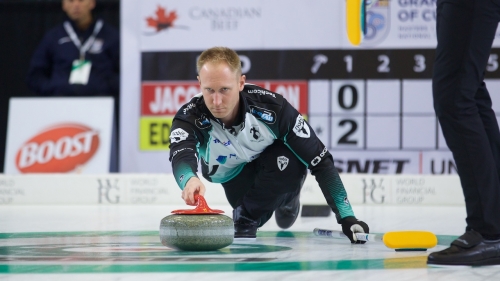 After blanking first 3 ends, Jacobs stole 1 in the fourth end to take an early lead when Edin came just short on his draw, then added another steal in the fifth end on an attempted double to blank. Edin was held to a single in the sixth end to trail 2-1, then forced Jacobs to a single in the seventh end after which Jacobs made the runback to run Edin out of stones in the final end for the 3-1 win.

Jacobs finished 3-1 in the 15 team round-robin qualifying round. In their opening game, Jacobs lost 6-3 to Bottcher, then responded with a 5-1 win over Yannick Schwaller (Bern, Switzerland). Jacobs won 4-2 against Edin, then won 4-3 against Yuta Matsumura (Kitami, Japan) in their final qualifying round match to advance to the playoff round.